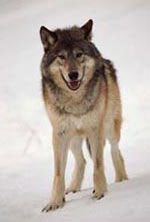 …That the gray wolf was once the most widely distributed species of wild dog in the world? Today their number and range is greatly diminished. The biggest threat to their survival is man. There are no known instances where wolves have severely lowered the numbers in a herd, threatening the survival of another animal species. Wolves have been feared, hated, hunted and persecuted more than any other animal in history. Yet, they are the most resilient living symbol of our country.

…That wolves appear to prefer discord in howling? Wolf howls are a long wail and reach a peak that then tapers off. If they accidentally harmonize, members of the pack will change pitch. Puppies start practicing howling at a very early age. It is believed that wolf packs are known to have their own call. Interestingly, wolves do not bark like their domestic descendants. Barking among wolves is usually a soft sound reserved for use close to their dens.

…That wolves are very loyal? Research of wolf packs shows how disheartened they become when caged alone, outside their families. Wolves have a strong social nature. A male and female head the wolf family, are extremely affectionate, and share responsibilities of raising pups. Wolves communicate their feelings, often referred to as “wolf talk” which keeps the pack together and working as a highly effective team.

GrayWolf Consulting supports charities around the world but enjoys particular support in its own backyard with a wolf conservancy in Salem, New York. Visit their website at www.nywolf.org.